House building begins by choosing the best stones – large, square and stable – and setting them at the corners. Cornerstones have a dual function: defining the dimensions of the building and tying its walls together. These will also serve as giant anchors to support walls to enclose the upper sections of the quarry.

Building on sloping bedrock requires great care in setting the first course, starting from the lowest part of the foundation and working upwards step by step. The bedrock footing is flattened and slightly stepped, but does not need to be completely level. By fitting stones into the uneven footing, the force of gravity will secure the buildings onto the bedrock. Using the land as the ancients did makes a lot of sense – there is less to dig and less to build.

Like every construction site, things soon became a well-organised mess. At least ours had the distinction of looking like an ancient ruin. Tourists were always dropping by to ask us what we were digging. “We’re excavating a first-century village,” we joked once, “come back in a month when we’re done”. And when they did, they were in for quite a surprise.

One of the most rewarding aspects of Nazareth Village was experiencing the enthusiasm of Nazarenes, building as their town was built 2000 years ago. 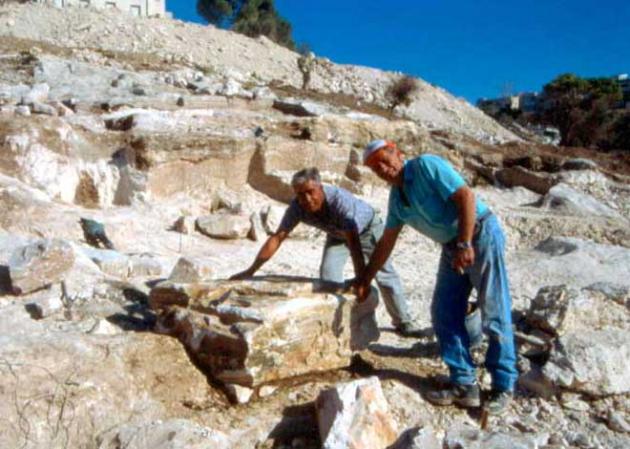 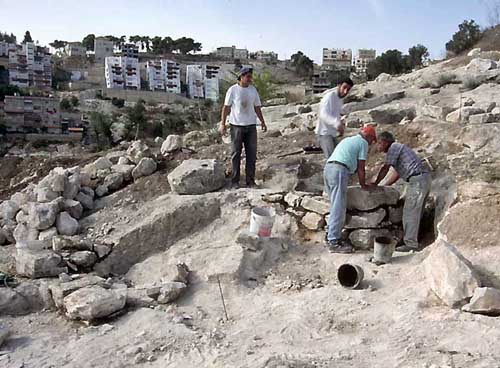 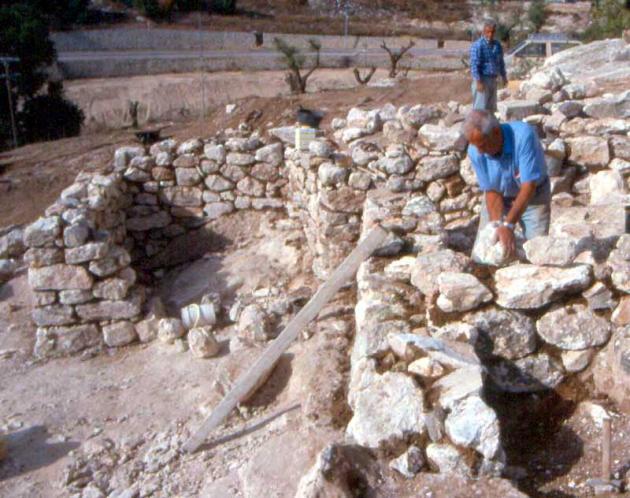 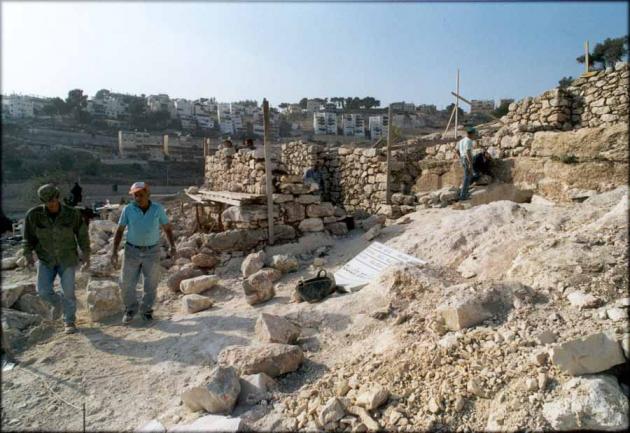 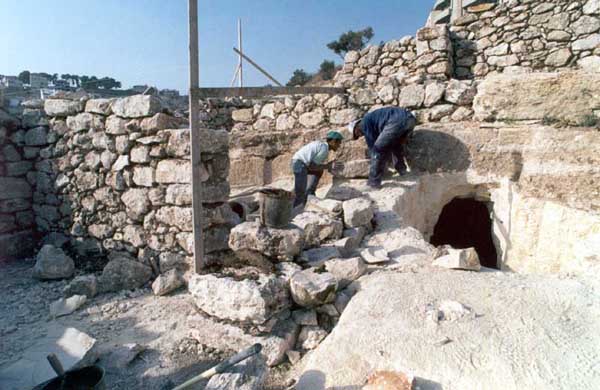 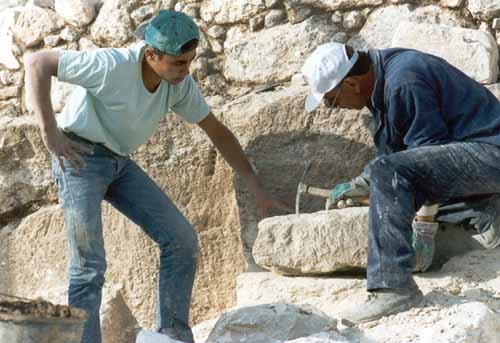 With one interior wall completed to lintel height, Nagib and Fouad raise another wall to abut the quarry face, enclosing the bedroom of the first house. The house cave was created by excavating the softer chalk (kirtom) out of the bedrock. The relatively cool and stable temperature inside such caves made them ideal cellars for storing foodstuffs such as wine and grain.

As corner walls link up, rooms start to appear. While the walls of ancient houses were built quite thick – usually 60 cm – for stability and insulation, the rooms themselves enclosed relatively small spaces of 9 square metres or less. As the walls were built up we began to realise that such houses were more cramped than those we are used to. The small room dimensions reflect the limitations of roofing materials – most commonly available timber would only span openings of 3 metres or less. 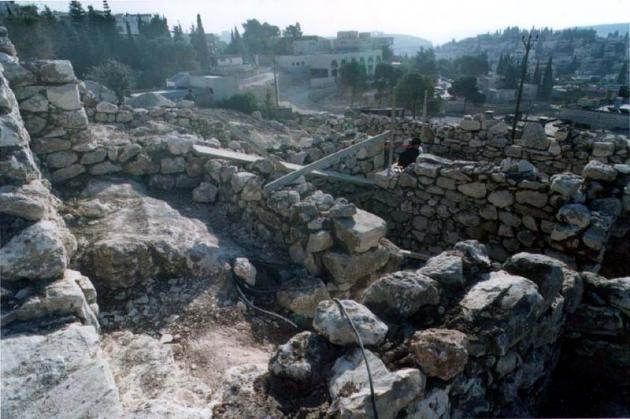 Mortars for building and plastering in antiquity

Lime mortars were commonly used to plaster water installations and wealthy or public structures. But the ancient sites we examined suggest that the majority of towns and villages built in the 1st Century used what was most cheap and available to them – the dirt.

Although ancient mud mortars have long since disappeared, the raw materials which were used are easy to find. Clearing bedrock to build the houses provided us with earth and chalk – the main ingredients. Leftover straw from winnowing grain was mixed in to reduce cracking and increase tensile strength. A small percentage of slaked lime improves the durability of the mortar.

We surveyed Palestinian villages in the area, looking at earth-mortared walls and talking to their builders. With their help and trial and error we formulated earth mortar recipes which are strong and durable in the Middle Eastern climate, using materials available in the First Century.

Although perhaps not as durable as lime mortar, earth mortar is an excellent insulator, reusable, easily maintainable, and its constituents are not only cheap, but very often free.

In the right hand image below, door jambs Munder learns a new job skill – the art of stone dressing. The Nari limestone used in ancient Nazareth is easily worked by hand. Ashlared blocks such as these, however, were more expensive to quarry and in most towns and villages were used for special purposes such as door jambs, thresholds and lintels. Tool marks from ancient nari blocks show that they were carved using a shahouta or stone axe – a tool familiar to many Palestinian craftsmen. 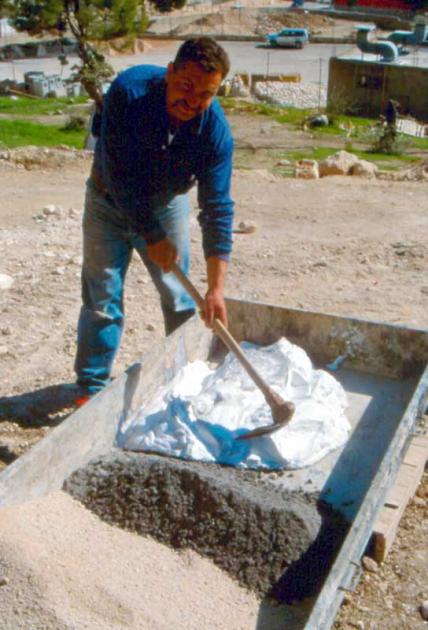 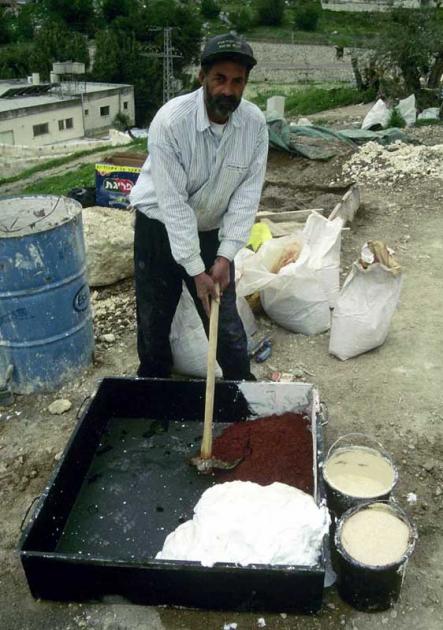 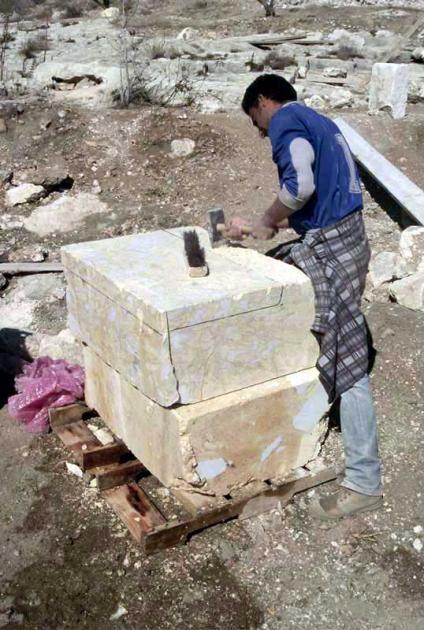